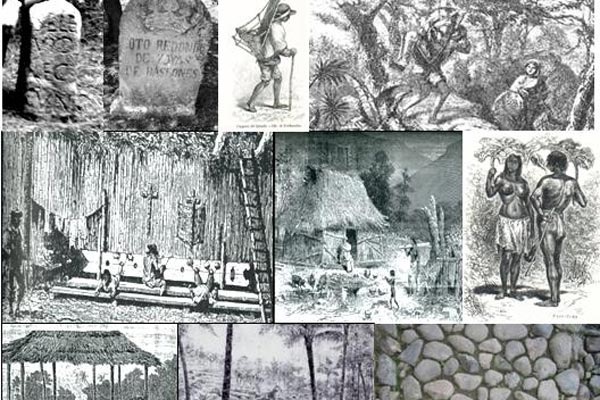 Salento is a municipality in the northern Quindio side. It was founded on the 5th of January 1842. That’s why is known as “The Father of Quindío” because it was the first settlement in the modern era of Quindio, the department couldn’t be conquered by the Spanish people, due to different reasons such as the presence of warrior indigenous tribal groups, the Pijaos community, who resist for more than 120 years to the Spanish genocide. Nowadays the evidence of their domain in the territory is reduced to a few desecrated grave lands, most of them in sacred places around the Andean mountain chain, more or less at the same altitude, in the transition between the Andean rainforest and the cloudy forest.

In 1830 Simón Bolívar traveled the route and ordered that it be upgraded due to its poor condition and strategic importance. However, the town was not established until 5 January 1842, after the “Guerra de los Supremos”. Political prisoners from that war were sent from Panamá, Antioquia, and Cauca to upgrade and maintain the road. After completing their sentences they were given a plot of land in the region. The site of the penal colony was known as Barcinales, located where Salento is today. However, the main settlement was in the valley of Boquía, where the Boquía stream joins the Quindío river. Families of the prisoners arrived and built their houses in Boquía and established farms upstream in the Cocora valley.

At first moment, the municipality had been founded was actually located in Boquia, beside the Quindio’s river, but this same when the flow increased and produced floods in the small village, it caused great economic, structural, and agricultural losses, the reason why the town had to be moved to the actual location higher in the mountains. Sometime around 1854, a flood of the Quindío river destroyed the settlement of Boquía, and the survivors rebuilt their houses in Barcinales. They retained the name Boquía for the new settlement, changing the name of the original settlement to Pueblo Viejo.

In 1864 a census of the new Boquía showed that it had 581 inhabitants. The occupational breakdown comprised 148 farmers, 2 carpenters, 1 blacksmith, 11 doctors, 1 lawyer, 2 tailors, 4 laborers, 11 merchants, and 11 watchmakers. In 1865 Boquía has officially declared a municipality and its name was changed again to Villa de Nueva Salento, and the name of Boquía reverted to the original settlement in the valley. The new name of the municipality was given in honor of Salento, a region in the south of Italy.

The people that inhabit here 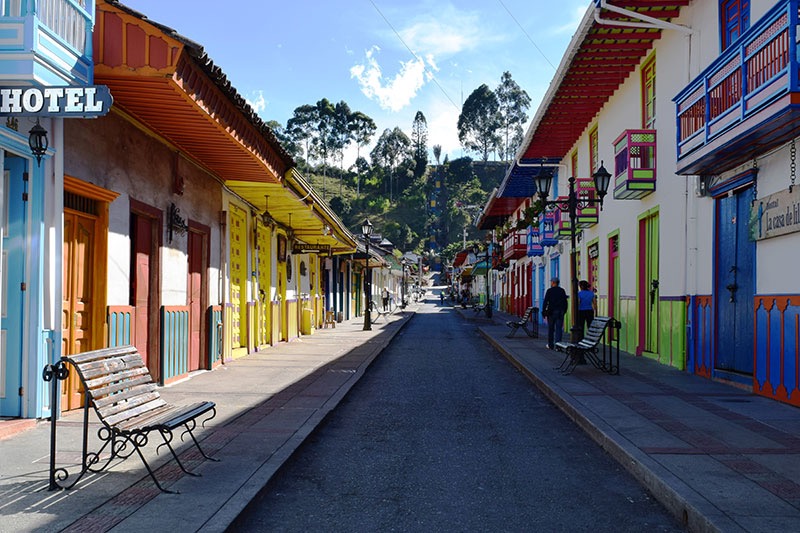 The last census showed that the population of the municipality is approximately 3.600 people in urban areas and 5.500 in rural places. The main route from Popayán and Cali to Bogotá used to pass through Salento, but when the route was diverted the town became isolated and did not develop as rapidly as the rest of the region. For this reason, it has retained more of its traditional colonial architecture than almost any other town in the Eje Cafetero, along with a quiet and relaxed way of life, and as a result, the town and nearby Cocora valley are among the most popular tourist destinations in Colombia. The historic center of the town was inscribed on the UNESCO World Heritage List as part of the “Coffee Cultural Landscape” in 2011.

The Coffee Cultural Landscape of Colombia (CCLC) is a continuing productive landscape consisting of a series of six sites, which integrate eighteen urban settlements. The declaratory illustrates natural, economic, and cultural features, combined in a mountainous area with collaboratively farmed coffee plantations, some of these in clearings of high forest.

The CCLC is the result of the adaptation process of Antioquian settlers, who arrived in the 19th century, a process which persists to this day and has created an economy and culture deeply rooted in the coffee production tradition. Coffee farms are located on steep mountain ranges with vertiginous slopes of over 25% (55 degrees), characteristic of challenging coffee terrain. The distinctive way of life of the Cafeteros (coffee farmers) is based on legacies that have been passed down from generation to generation and are linked to their traditional landownership and the distinctive small farm production system.

The typical architecture in the urban settlements is a fusion between the Spanish cultural patterns and the indigenous culture of the region adapted as well to the coffee growing process, through for example their sliding roofs. Houses function as both dwelling units and centers of economic activity, with walls built in the traditional, more flexible, and dynamic ‘bahareque’ constructive system, and covered by a layer of south American bamboo (Guadua Angustifolia) well known for its resistance and malleability. Over fifty percent of the walls are still built using this traditional method.

To facilitate the understanding of this exceptional landscape, the property’s elements of social adaptation to a unique use of land, and the development of particular cultural and social traditions in both agricultural practices and the arrangement of settlements, contribute to the complete image of a continuing, productive and living landscape. The continuity of traditional small-plot coffee farming, often run in family units, and the strong linkages to the associated cultural traditions contribute to the integrity but are vulnerable to fluctuations in the international coffee market prices and resulting economic pressures. The integrity of the property would also be negatively affected by gold mining activities.

The Coffee Cultural Landscape of Colombia is an authentic reflection of a centenary process of man’s adaptation to the challenging geographical and climatic conditions of this area, known as the Eje Cafetero. The CCLC contains very few contemporary incongruous additions to its traditional architectural and landscape patterns and no substantial modifications to the small towns located in the property as well as in the buffer zone. Aspects such as traditions, language, and other forms of intangible heritage, have been preserved, mostly by owners and the local community, who have a high sense of social appropriation of their cultural heritage.

Most popular traditions and things to do 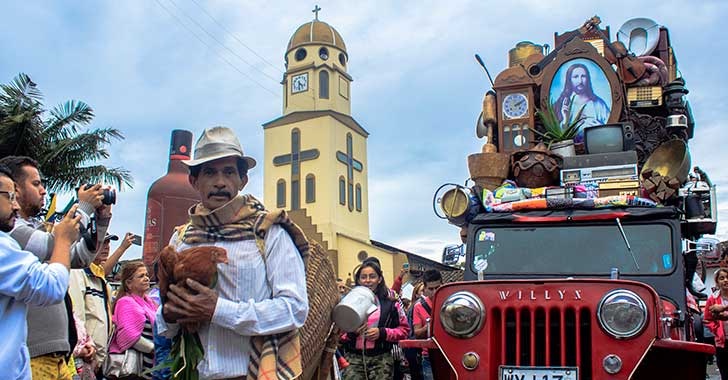 The town is one of the major tourist attractions of Colombia, thanks to its peaceful nature, impressive scenery, easy access to the Cocora valley, and the retention of much of its original bahareque architecture typical of the Coffee cultural landscape region. This style of architecture is especially notable on Carrera 6, known as “Calle Real” (Royal Street), the road that leads north-east from the town square to a “mirador” (viewpoint), “Alto de la Cruz”, from where you can see almost the whole town. The road is the major thoroughfare of Salento and contains many shops, mainly selling locally-made handcrafts.

Viewpoint Alto de la Cruz is reached from the end of “Calle Real” with 250 steps marked with the fourteen Stations of the Cross spaced at intervals along the way. An alternative, less direct route to the mirador by road avoids the stairway. From the Mirador, there are extensive views of the Cocora valley and many of the mountains of the Los Nevados National Natural Park.
The restaurants, particularly those in the town square, specialize in freshwater trout (farmed locally further up the Cocora valley) cooked in a variety of sauces and served on a large Patacon, a fritter of green plantain smashed.

Salento is the starting point for excursions into the Cocora valley and hiking in the Los Nevados National Natural Park: jeep taxis leave from the town square and travel 11 km up the valley to the settlement of “Cocora”, from where the valley may be explored on foot or on horseback going in numerous trails.

The town’s festival takes place each year in the first week of January, to coincide with the celebrations of the anniversary of the town’s foundation on 5 January. When “The Yipao” or Jeep parade happens, it is a folkloric celebration in the anniversary parties of the town. The first Jeeps (M38 or CJ-2A models) arrived in Colombia in 1946 for military purposes. They were imported by the Colombian Ministry of Defense and soon became very popular among Colombian coffee farmers who saw in this vehicle the needed qualities for the difficult roads in the mountainous region of the country. Besides the transportation of coffee, Jeeps are used to transport many other agricultural products, as well as country workers to places previously accessible only to pack animals. Due to this quality, the Jeeps are also known locally in Spanish: “mulitas mecanicas”(or mechanical mules). Many families in the Paisa region and Colombian Coffee-Growers Axis own Jeep vehicles, which have become a beloved symbol of the coffee culture. Often the Jeeps have many ornaments, icons, and flashy accessories, in a kitsch style.

The first edition of the Yipao parade was organized by Mrs. Joan Jaramillo, headmistress of the protocol of the Quindio Governor’s office in 1988. The event has several categories separated according to the products carried in the vehicles:

The vehicles are driven by the main streets of the city and the Jeeps with the largest number of objects carried and the most harmonious arrangements earn prizes. In February 2006, a Guinness World Record was established for the “Longest Jeep Parade” in Calarca, with a caravan of over 370 Jeep Willys vehicles. 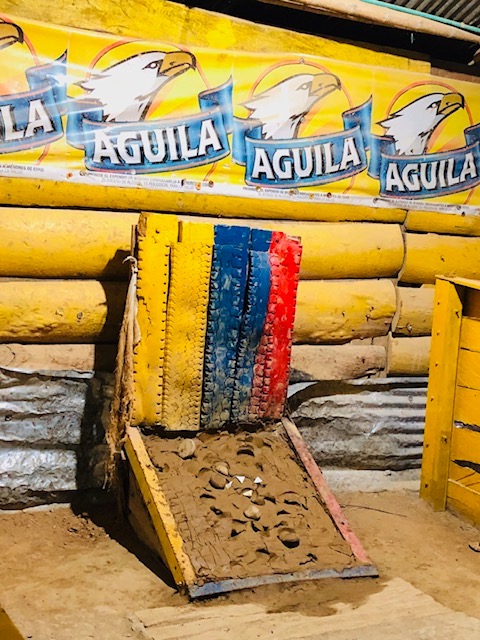 Salento is undeniably beautiful. This colonial Colombian town has retained much of its old-world charm and serves as a portal to another time, another way of life. Salento’s colorful paisa architecture mixes with a distinctly laid-back approach to life that only a small town can elicit, creating the sensation of visiting the past. And that’s just inside the town itself. Here also you can experience the tradition to play “Tejo”, which is a traditional Colombian sport with roots dating back centuries. No one knows just how old the game is exactly, its origin is not documented. Be that as it may, Tejo is pretty darn popular in Colombia.

One of the rules of Tejo is that it must be played while drinking beer. That’s all we needed to hear before signing up for our first Tejo match at Salento. It turns out, Tejo is pretty much like horseshoes… except with gunpowder. That’s right, things (sort of) explode during a game of Tejo. Cool!. So the super simplified rules of the game are as follows. You open a can/bottle of beer. You then attempt to throw a metal puck, called a Tejo, down a narrow lane to hit a small pouch of gunpowder positioned on a metal ring in the middle of a box of clay. Hit a pouch with the metal puck, the pouch goes boom, and you get some points. There is far more to the game than that, but you get the gist.

So, when in Salento, head to a Tejo place, acquire a bucket of cold beer, and blow up some gunpowder. It’ll be fun, and it’s a great way to spend a couple of hours in the evening if you are looking for things to do in Salento!

IMPORTANT! Please call us before making a booking within two weeks due to high demand. Dismiss